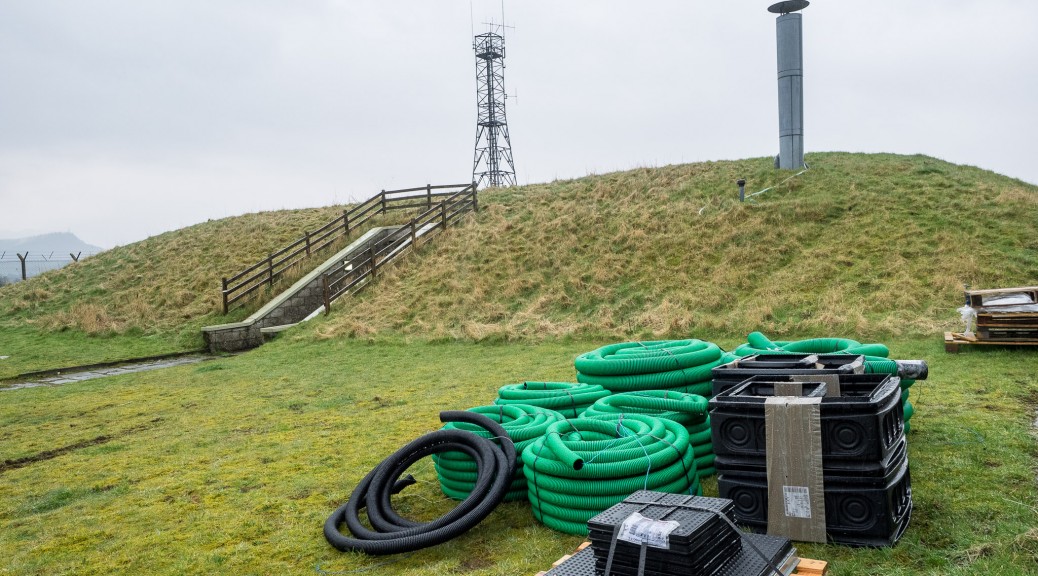 Yes, these are pictures of a nuclear bunker, this being the forthcoming Bogons data centre near Comrie. It is also where our fibre should meet that of the wider world and will, we hope, achieve  economies of scale from aggregation with other users that will make our network ever cheaper to run: if we just bought our backhaul (the link between the glen and the wider internet) at about the same initial cost from a commercial provider, we’d still have to pay Openreach’s Excess Construction Costs to get the link from the Strathyre Exchange to the entrance to the glen, but we’d never thereafter gain any benefit from others using the wider link. With the bunker, the idea is that we start at par and then go down in cost from there.

So we’ve got the backhaul costs pretty much nailed down: pretty much everything we need in order to get a a little spot of laser light to the start of the glen. The remaining logistical problem is that we’re going around in small circles with contractors for the dig in the glen: they either don’t want the work and over-quote or they don’t understand the dynamic of community engagement and the cost again rises.

On the funding side, we’ve had agreement for most of the last year for Community Broadband Scotland funding and, having had a huge hole kicked in our budget by the sudden withdrawal of the Broadband Voucher Scheme, we’ve since lined up other potential (and apparently willing) sources of public funding. That however, takes us over the EU’s ‘de minimis’ limit for aggregate state aid, which means that we have to go through yet another procurement process. In principle, that should have been relatively simple, although it would have been nice to have been told this six months ago, especially as the EU introduced its General Block Exemption Regulation (GBER) specifically to raise the state aid threshold for broadband rollout in areas of demonstrable market failure. “Demonstrable market failure”, eh? Well, that should cover most of the UK…

…unfortunately, it transpires that The Scottish Government has chosen (and it may have been Hobson’s choice, given that telecoms strategy is not actually devolved to Holyrood) to use the GBER accreditation of the overall UK broadband delivery project, BDUK,  to access that approval route. However, in the grand tradition of there being no Good Idea that the British can’t turn into a Very Bad One, we have been informed that BDUK has failed to maintain its GBER status. So, until such time as that is sorted out, we appear to be stuck with either wishful thinking or a full EU procurement, which would lose us another year on our project. We’re told that this is ‘imminent’ but it is currently unclear whether that’s to a real-world definition of ’imminent’ or that of the Civil Service. We have a weather-limited build season here and we’re already getting into it, so there is currently much twitching of appendages.

What we are hoping for is some test trenches to be dug in the very near future, to test the viability of a new micro-trenching technology. When that happens, there will be pictures of whirring things and (no doubt) flying clods of scenery. The joy of anticipation, eh?

However work continues apace on getting everything lined up in terms of funding, skills, schedule and contract. We’re talking at the UKNOF (UK Network Operators’ Forum) meeting in Manchester on 21 April and will be attending a Show’n’Tell day being organised by the ever-helpful trailblazers of community fibre, Broadband For the Rural North (B4RN) on 26th April.

Incidentally, the header picture shows the piles of conduit and ducting that are about to be used to provide the adjacent old army camp, now owned by the Comrie Development Trust, with fibre broadband.

2 thoughts on “Two Steps Forward, One Step Back…”