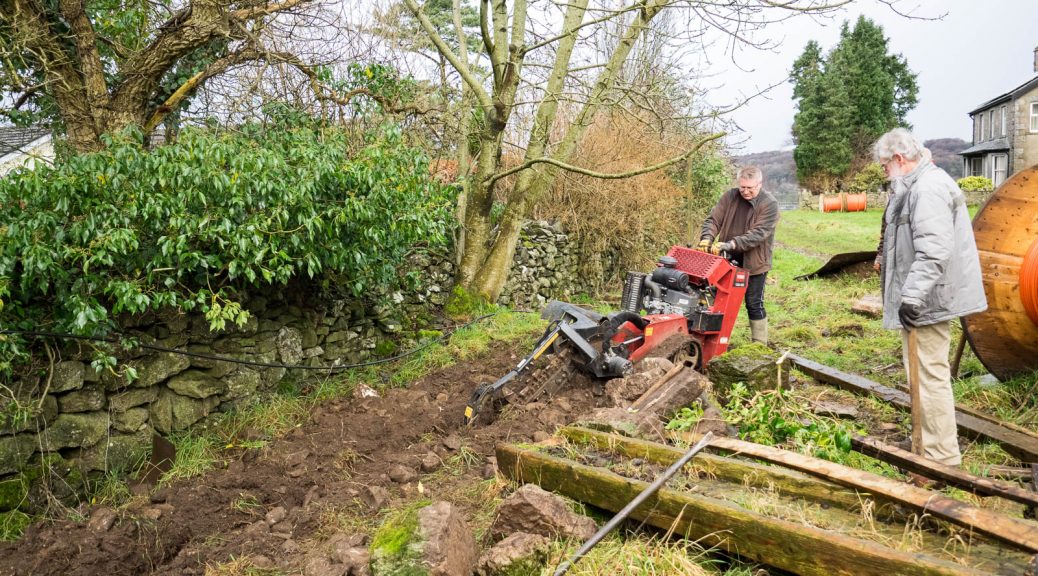 As many will know by know, the pioneer project in self-assembly broadband isn’t Swedish, but from Lancashire, where the staff and volunteers of B4RN have now rolled out true fibre broadband, so far to 2600 properties, with the number growing by the day. Their service is truly future-proof, delivering 1Gb/s now, rising soon to 5Gb/s for those who want it. To put that into perspective, that’s 3x as fast on download and 17x as fast on upload as BT’s fibre-to-the-home (FTTH) service, even in the few areas where that is available. And it’s 12.5x as fast on download as BT’s so-called “Superfast Fibre” (which it isn’t). And, when there’s a demand for even more performance, all B4RN has to do is turn up the wick, not dig up the ground.

They’ve achieved all of that through a combination of vision and good timing: they set up a community enterprise (as we’ve done), got private investment under EIS – the Enterprise Investment Scheme (which we haven’t), and got started before BT was being paid large sums of public money to incidentally shut down any incipient competition (which we didn’t).

Our situation though is somewhat different: our initial market is constrained by the fact that BT has put its low-quality services in to Strathyre and Lochearnhead (for those properties who can get it), thereby raising the bar for us to get into a big enough market to be commercially viable. So we chose to seek public funding for our project, which is starting with a catchment of slightly under 200 properties. That may yet prove to have been a mistake, as the utter pain and expensively incomprehensible bureaucracy of the process has already lost us more than three years on our project, but at least we’re now out to tender (again) and have a set of expressions of interest, which we’re currently evaluating. So, as long as the bureaucrats don’t sink us again, we hope to be in build in the summer.

And what we need to do is (mostly) not rocket science, but basic plumbing: we need to run a bunch of plastic pipes in the ground up the glen, with boxes every so often to allow us to run smaller tubes to each property. After that, it’s a matter of running the fibre itself through the pipes and splicing it all together. That is definitely a skilled job, but anyone who can knit would have zero problem with it.

It was learn the practicalities of that, that took three of us: Richard Harris, David Johnston and Dick Lewis, down to B4RN for a couple of days last week. There, Tom Rigg and the rest of the ever-hospitable team at B4RN and their volunteers in Silverdale (beside Morecambe Bay) showed us the ropes (literally) and some of their hard-learned tricks for getting things done, particularly over tricky terrain. 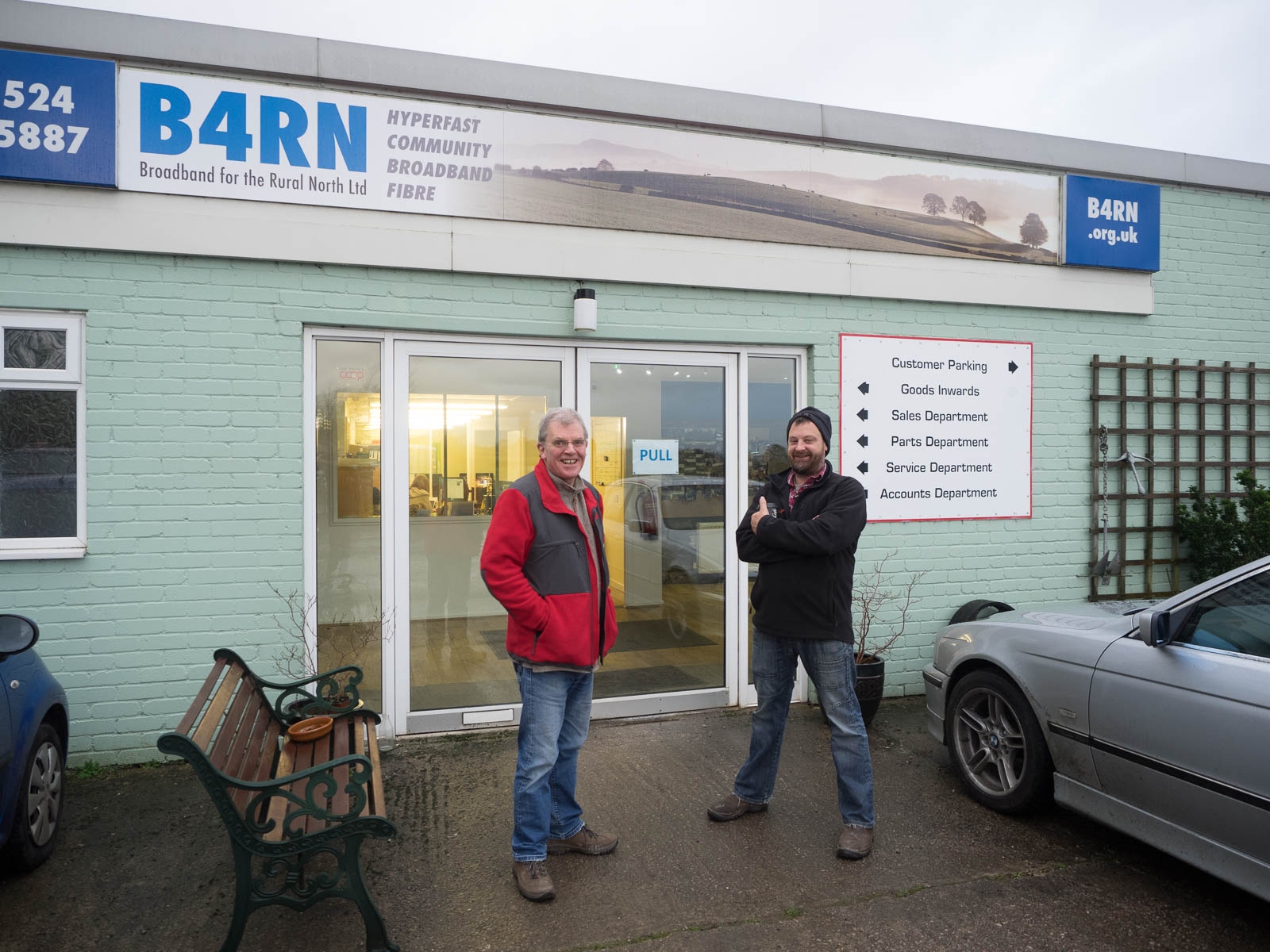 Our first stop was B4RN HQ, a converted warehouse in the old station yard in Carnforth. Here, we were introduced us to the network control room and to the warehouse containing large reels of ducting and fibre and boxes and cabinets ready to be rolled out in the field (literally). If you’re used to the idea of ‘ducting’ being the large concertina field drains that we sling around the glen, have a look at the pictures here, showing just how small the ducting needed is. It does come in varying sizes, but the largest we’d need is no more than about 40mm across – B4RN even uses standard 16mm plumbing joints to join sections together. The fibre that fits down the ducting is even smaller – less than 8mm for a cable holding 192 separate fibres. 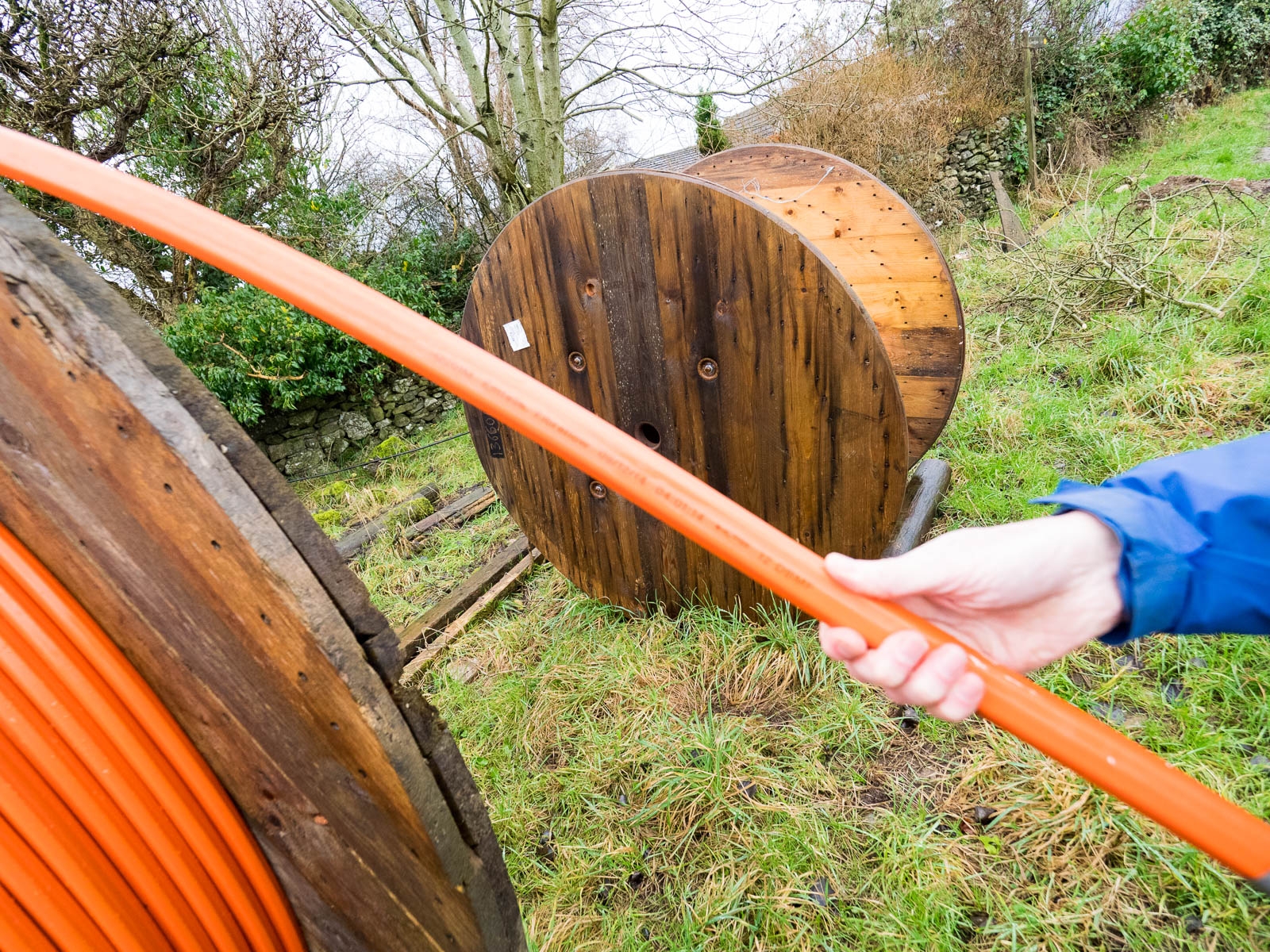 The junction boxes that go in the ground range from small plastic ‘bullets’ to the standard-sized rectangular access hatches we see for the BT ducting in the road to Balquhidder. The latter are built simply by digging a hole and stacking moulded sections to the desired depth – they don’t need to be waterproof. 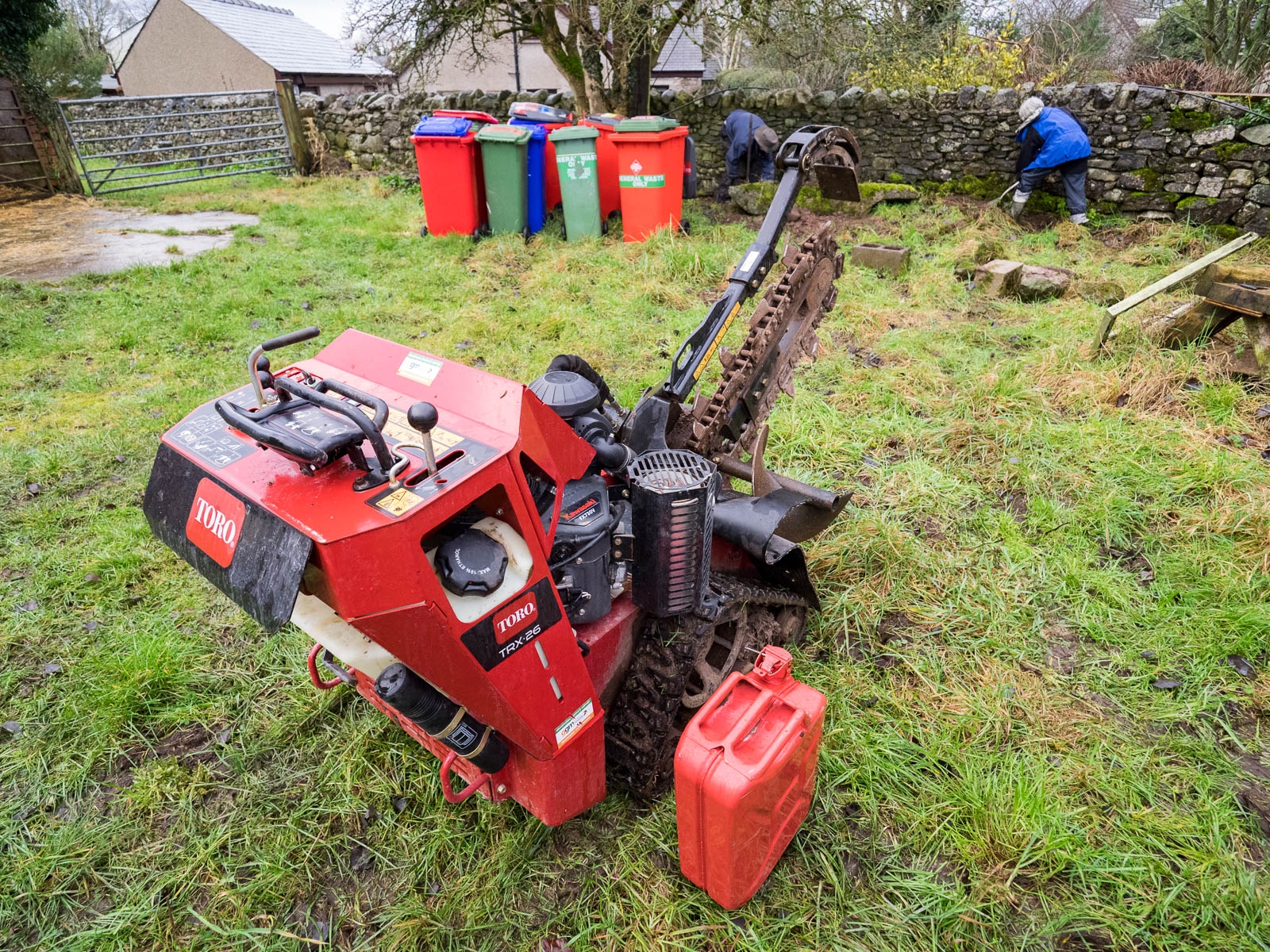 Ducting is then dug in – by any combination of mole plough, hand or the trencher you see here. We watched a volunteer team from the Silverdale community using hand tools, muscle power and a trencher (the thing that looks like a chainsaw on tracks). They were working in a farmyard full of buried stones and rubble, alongside a drystone wall, and they still managed to cover about 10m in the fifteen minutes or so for which we were watching them (see video). Where roads need to be crossed, contractors (with all the tickets needed) are used and big streams are crossed using specialist direction drilling – the trick there is to get everything lined up in advance then get the drillers to blitz all of them in a single visit. Smaller streams and gullies can be crossed using a length of armoured ducting. In Balquhidder, where we need to cross the rivers, there’s usually a bridge we can use. For the many gullies where that isn’t the case, one of our jobs over the next couple of months is to determine which ones we can dig through and which may require drilling – we’ve already mapped the locations of most of them. 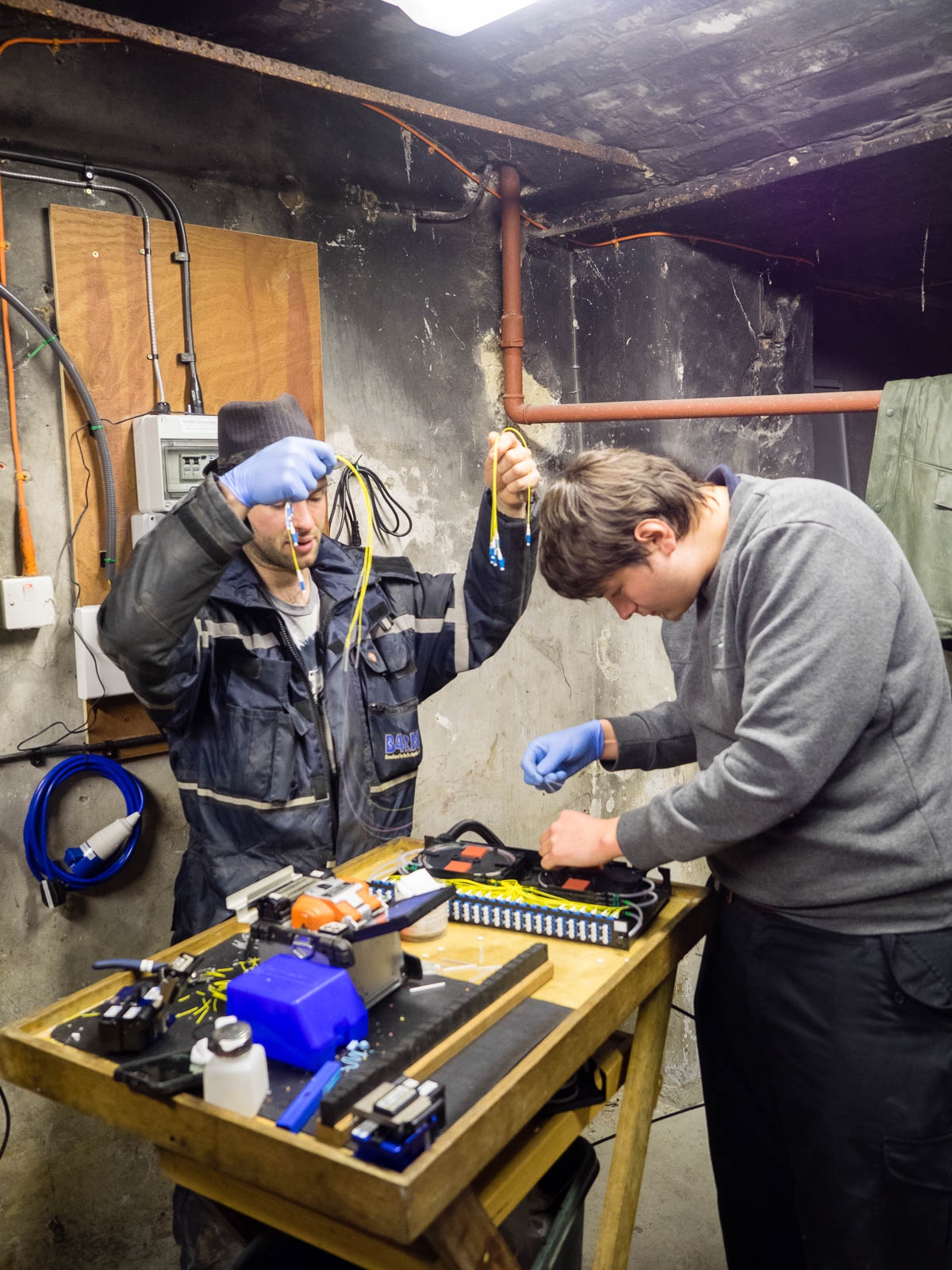 Having got under the feet of the dig team quite sufficiently for one day, we headed to the parish church in the centre of Silverdale where, in the depths of the church crypt, two of B4RN’s team were busy weaving together the incoming fibre from B4RN to connectors that plug into the outgoing fibres to the individual properties. That uses a combination of manual dexterity and a machine called a fusion splicer, which automatically welds together the two ends, to an accuracy of less than 4microns (about 1/20 of the diameter of a human hair). They’re then laid carefully into a connector box which, when full, ends up in a carefully labelled rack. And if there’s one thing that a project like this needs, it’s an utterly OCD level of attention to labelling EVERYTHING: when you’re got a team several kilometres away trying to work out which of a hundred or so fibres is the one leading back to the centre, asking them to guess which is which is not going to be life-prolonging.

Once all the ducting is in place, the next job is to get the fibre itself down the ducts, firstly from the central distribution point to each ground box, and then from that to each property that’s served by a box. That’s done by a compressor that blows air down the duct, effectively lubricating the fibre that’s then fed through by a pair of rollers – even a couple of kilometres can take no more than half an hour or so, so it’s a pretty rapid process. 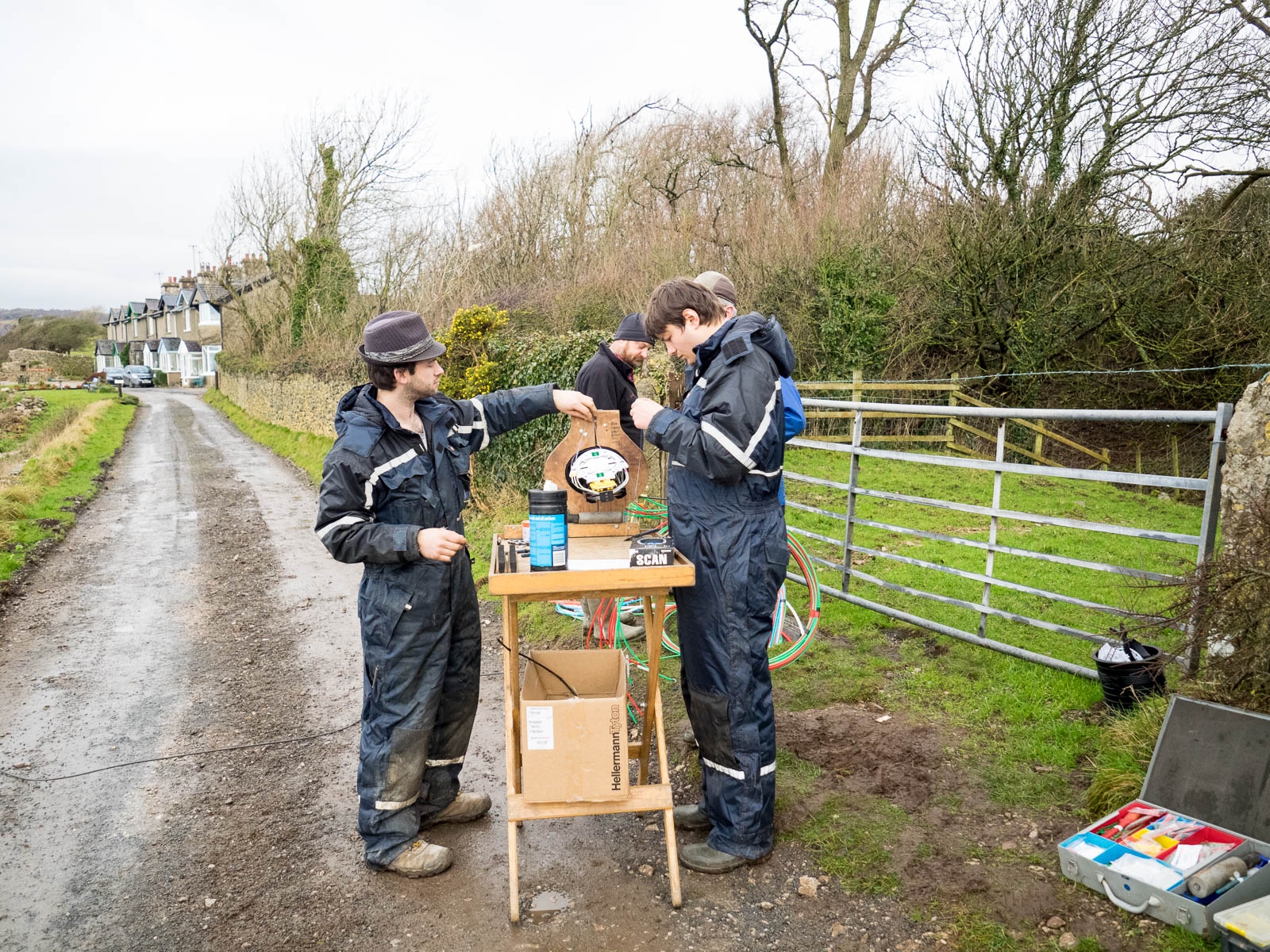 Here, we’ve moved on to a cluster of houses on the edge of Morecambe Bay, watching the team there blowing and splicing the fibre together –  a small (4-fibre) cable to each property is being pulled from the drum that holds 6km of the stuff and blown through each piece of ducting in turn. That takes place from the shelter of a converted sheep trailer. I think we should be able to get hold of one of those… 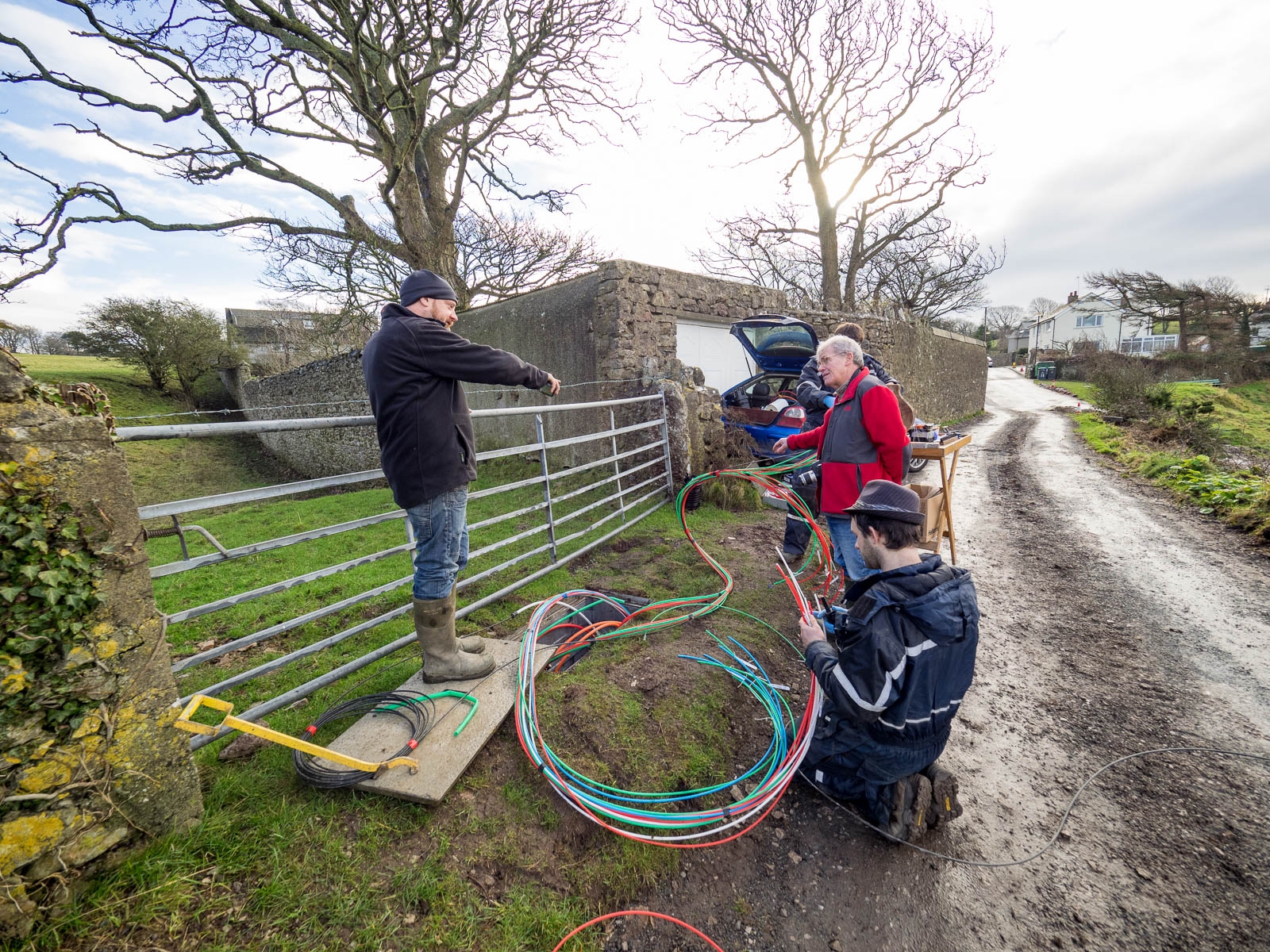 The splicing team then rock up and splice together the cables to each property with the cable coming from the central point. All of that is then locked into a sealed ‘bullet’ and laid into the ground chamber. No power is required to these and, although each bullet is waterproof, fibre itself is pretty tolerant of being wet – there’s nothing to short-circuit. 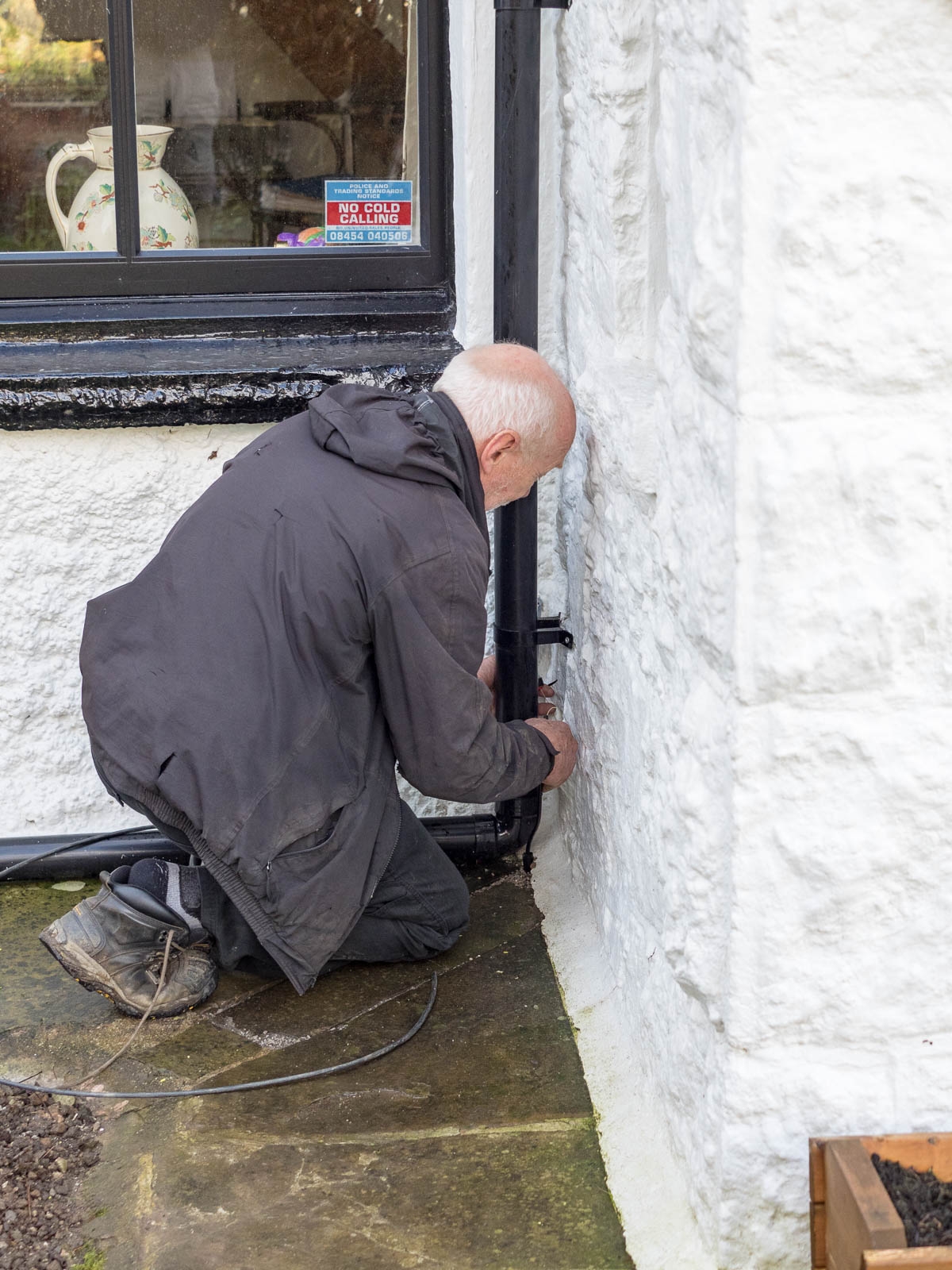 That’s the point at which someone else turns up to an individual property, drills hole in the outside wall (if there isn’t a suitable one already) and runs the last piece of fibre through the wall to the wall box inside. The box on the outside is small and sufficiently unobtrusive that it can happily (as here) hide behind a roan pipe. Hooked up inside, a quick test and everything is powered on, at which point another part of rural Lancashire has leapt into the 21st century, with broadband speeds matching the best available anywhere in the world. 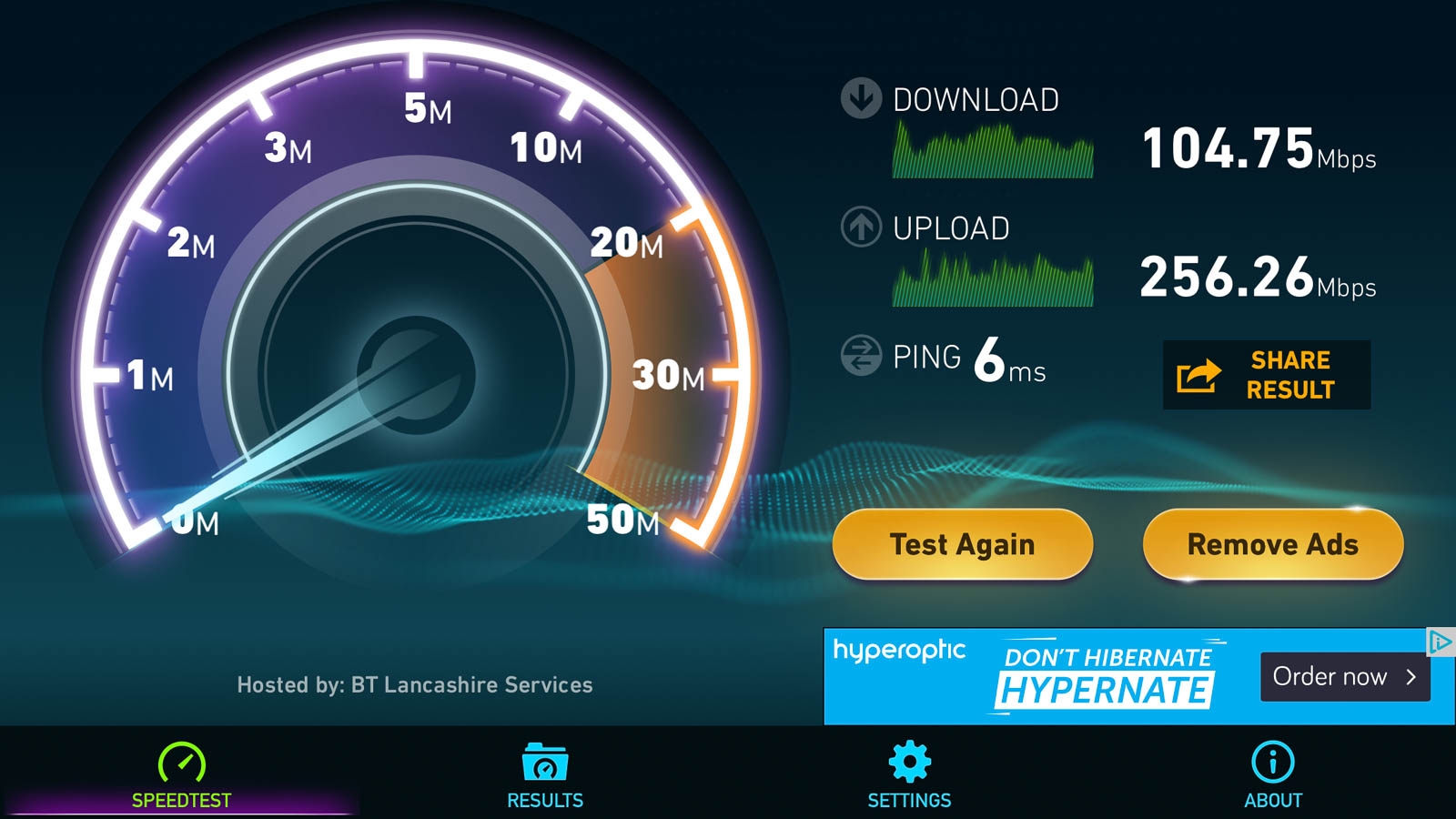 Which is worth noting: everywhere we went, we had network access that was only limited by the performance of the wifi networks in each property: even there, the little local tearoom in Hornby not only advertises its connection as you come into town, but was giving results in the hundreds of Mb/s – an order of magnitude faster than the average UK connection speed. We noticed a number of people who obviously weren’t yet connected at home, eating lunch and doing everything from booking holidays to their farm subsidy returns. In what was previously a picturesque but deprived rural area, property prices for connected properties are shooting up and people are queuing up to move to the area from the urban centres of Manchester, Oldham and the like.

So another huge “thank you” to the team at B4RN and to the local volunteers at Silverdale for their patience with us whilst we poked, prodded and asked silly questions. We really have learned at lot from both the trip itself and the simple knowledge that projects like this are both transformational for an area and are entirely doable, given a bit of commitment and determination from the community.